The Coakham Bloodhounds Hunt was founded in 1976 by the late Neil Wates (see "A Piece from the Past"). We hunt "the cleanboot" (unadulterated human scent left by a man or woman running ahead of the pack). Hunting with a pack of bloodhounds is one of the least artificial method of hunting organised quarry, and, whereas a fox will run freely, a human quarry can make more effective use of the increasingly urbanised countryside. The hounds hunt by scent alone, unlike many other breeds of hounds that hunt by sight (see "The Hounds").

The Coakham Bloodhounds meet at noon each Sunday from mid October to the first Sunday in May, with occasional mid-week bye-days.

All our meets are by held by the generous invitation of the farmers and landowners, which is especially appreciated as this type of hunting offers no clear benefit to farmers.

A day's hunting with the Coakham Bloodhounds usually means a good three hours in the saddle, with the thrill of riding behind a driving pack of hounds, jumping a range of fences from huge hedges to ditches and fixed timber. In the course of a day, the hunt will follow three to six lines, covering in total between 10-20 miles. The country is usually walked with the landowners the week before a meet to prepare the routes, trim hedges and build fences, but the field does not know the route hounds will follow.

The quarry (usually two or three cross country runners) play a major role in the day's sport. Apart from being very fit, they must know how the hounds will hunt. The experienced Coakham quarry also know how to throw the hounds off their scent. They usually set off 45 minutes before the hounds are laid onto their trail and the field, helping to maintain the excitement and uncertainty of hunting a live quarry. There is usually a half hour breaks between each line to allow the quarry to run the next and to give the bloodhounds, horses and riders a chance to catch their breath.

For the mounted followers the bloodhounds provide the thrill of riding behind a driving pack of hounds, striving to keep up with the pack. People unfamiliar with this type of hunting sometimes assume that only those horses and riders with the courage to jump a succession of huge hedges can enjoy a day out with the pack. But the Coakham Bloodhounds offers a wide variety of days, ranging from meets on the Downs where the steep slopes are more of an issue than the small number of fences jumped, through to easy days well within the capability of any competent rider. These are interspersed with "Big Hedge" days, which are set to challenge both horse and rider, and should only be attempted by experienced riders to hounds. But, whatever the day, the Coakham Bloodhounds "go", and it is essential that both horse and rider are fit.

The day always finishes with tea and sandwiches, sometimes, if we are lucky, sausages and mash.

The hunt has now assumed entirely amateur status, funded and administered by the Committee which also selects the Masters (see "Masters and Hunt Staff"). The hunt country covers the South East of England, mainly the counties of Kent, Surrey and East Sussex. It is registered with the Masters of Drag and Bloodhounds Association. In 1990 the pack was rekenneled at Slivericks, which is still its home today.

When the pack was first established, it hunted with pure bred bloodhounds. But it soon found that, whilst their ability to follow the scent was without compare, they lacked the speed across open countryside and the enthusiasm to cope with natural obstacles. The current pack consists of bloodhounds crossbred to the Dumfriesshire Foxhound, a unique out-cross which has developed the ability of the pack to follow a natural human scent with voice, speed, agility and drive.

The earliest know ancestor of the bloodhound is most probably a Celtic beagle by the name of Seguier. In the ninth century in France and Belgium this breed of hound was called the Saint Hubert Hound. The name came from the monastery of Saint Hubert at Andain, where the robust Seguier had been bred for over 1000 years. According to legend, Bishop Hubert was a keen huntsman, and regularly hunted his hounds in the Ardennes. Buried on November 3rd, 825, in the monastery which later took his name, Saint Hubert became the patron saint of hunting. Each season the Coakham Bloodhounds endeavour to meet on this day, and the hounds are blessed before the day's hunting.

On the continent the pure line was gradually lost through cross breeding. In England, however, the bloodhound survived as a breed and thrived in the wild English/Scottish borderlands. That inhospitable and inaccessible terrain was inhabited by clans which were constantly engaged in bitter disputes and feuds, protecting their property from rival clans, poachers and cattle thieves. All the clans made good use of the robust, strong and indefatigable descendants of the Seguiers. The number and importance of these bloodhounds was such that a special tax was levied and used for the upkeep of the packs. Some of these hounds usually worked on a leash, 1.5 fathoms long and made from horse hide, and were known as Lyme or Lyamhounds.

Other hounds which required more space in which to track the human scent were called Sleuthhounds. These hounds gained a reputation for always getting their man, and when the pack was put on the scent of a wounded person leaving a trail of blood, it was only a matter of time before they were caught, which is how they eventually became known as bloodhounds.

200 years on, the enthusiasm with which the hounds jump fences and cross rivers in pursuit of the scent often makes new followers fear for the physical well being of the human quarry. But these days, when they are finally caught, the most they succumb to is chest high muddy paws and big slobbery licks. 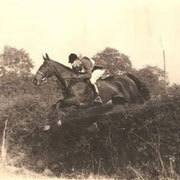 An article written by the then Joint Masters Neil Wates and Nigel Budd, founders of the Coakham Bloodhounds, back in 1979.  Plus tributes to Nigel Budd, James Ramus and John Lloyd. 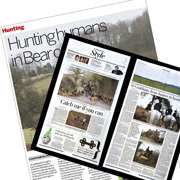 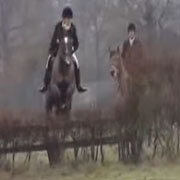 Videos of the Coakham, including the BBC film on Insight